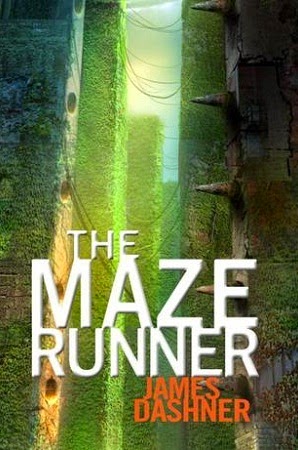 Juonikuvaus: "If you ain't scared, you ain't human."

When Thomas wakes up in the lift, the only thing he can remember is his name. He's surrounded by strangers--boys whose memories are also gone.

Outside the towering stone walls that surround the Glade is a limitless, ever-changing maze. It's the only way out--and no one's ever made it through alive.

Then a girl arrives. The first girl ever. And the message she delivers is terrifying.

Burning blue eyes darted back and forth as she took deep breaths. Her pink lips trembled as she mumbled something over and over, indecipherable. Then she spoke one sentence – her voice hollow and haunted, but clear.
”Everything is about to change.”
Thomas stared in wonder as her eyes rolled up into her head and she fell back to the ground. Her right fist shot into the air as she laded, staying rigid after she grew still, pointing towards the sky. Clutched in her hand was a wadded piece of paper.
Thomas tried to swallow but his mouth was too dry. Newt ran forward and pulled her fingers apart, grabbing the paper. With shaking hands he unfolded it, then dropped to his knees, spreading out the note on the ground. Thomas moved up behind him to get a look.
Scrawled across the paper in thick black letters were five words:
She's the last one. Ever.