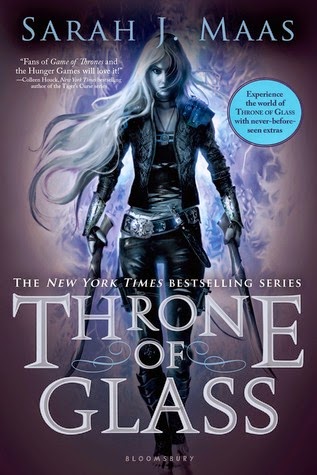 Juonikuvaus: In a land without magic, where the king rules with an iron hand, an assassin is summoned to the castle. She comes not to kill the king, but to win her freedom. If she defeats twenty-three killers, thieves, and warriors in a competition, she is released from prison to serve as the king's champion. Her name is Celaena Sardothien.

The Crown Prince will provoke her. The Captain of the Guard will protect her. But something evil dwells in the castle of glass--and it's there to kill. When her competitors start dying one by one, Celaena's fight for freedom becomes a fight for survival, and a desperate quest to root out the evil before it destroys her world.

Celaena's lovely visions exploded like dust from a slammed book. ”Then I might as well leap from the window. A year in this place has worn me through – imagine what will happen if I return. I'd be dead by my second year.” She tossed her head. ”Your offer seems fair enough.”
”Fair enough indeed,” Dorian said, and waved a hand at Chaol. ”Take her to her rooms and clean her up.” He fixed her with a stare. ”We depart for Rithhold in the morning. Don't disappoint me, Sardothien.”
It was nonsense, of course. How difficult could it be to outshine, outsmart, and then obliterate her competitors? She didn't smile, for she knew that if she did, it would open her to a realm of hope that had ong been closed. But still, she felt like seizing the prince and dancing. She tried to think of music, tried to think of a celebratory tune, but could only recall a solitary line from the mournful bellowing of the Eyllwe work songs, deep and slow like honey poured from a jar: ”And go home at last...”
She didn't notice when Captain Westfall led her away, nor did she notice when they walked down hall after hall.
Yes, she would go – to Rifthold, to anywhere, even through the Gates of the Wyrd and into Hell itself, if it mean freedom.
After all, you aren't Adarlan's Assassin for nothing.